Here you can support us:

Free Dogs of the World 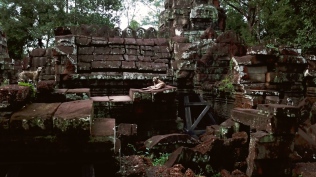 We have been to Cambodia – and met some very nice village and pariah dogs (see below for more informations on those free-ranging dogs) .  They are living on the streets in Siem Reap or in the old temples of Angkor Wat. Some are fed by the  monks. There is a gang of four dogs near a temple downtown, that seem to have a human friend: A man, that looks like an officer in uniform (in Germany they used to be called “Blockwarts”: they sit on a chair all day long, watching their block and report if something “odd” is happening). Watch how the female village dog follows him closely – thus being able to cross the busy street unharmed. And see how one is not making it  to the other side, nearly getting hit by a car… It´s quite a story we have filmed there on the streets of Siem Reap.

Pariah dogs (free-ranging) and Village dogs (rural free-ranging)  are canines that have kept close to the original form and have evolved with little or no purposeful human intervention. Pariahs in all countries tend toward a very similar, typical morphology known as the “long-term pariah morphotype”.[6] Village dogs have developed specific anatomical adaptations to their local environment are known as “landraces”.Two familiar examples of these are the Basenji (from the African Congo) and the Canaan dog (from the Middle East). These two types  were the earliest to be domesticated.

Dogs of the world in Cambodia