Here you can support us:

Here´s the link to the previous post. One word on the translation: we are germans, so please don´t expect us to do oxford-style. But we give our best!

So we met Jemima Harrison at the “Crufts“ – the world´s biggest dog show. Five years earlier she had caused a great stir within the pedigree dog breeders crowd by launching the great documentary  “Pedigree dogs exposed”. But: Had anything changed since then – towards the good at best?!

And indeed, the winning bassethound´s belly didn´t slide over the exhibition grounds anymore, but ok, their ears still do while bending down…

And, yes, the winners underwent a vet check! It had been announced in the media by the Kennel Club. The signal: We are on our way towards improvement, are we?

e building. To see if it collapsed dead on the floor? No, fortunately the pug did not do its critics the favour. Such a pug may not look like a real wolfs’ descendant, though it has 99.9 percent of its genes; a pug might rather look like a „mixed creature“ of some sort, but still, a pug is also a lovely creature which you can take for a walk, but maybe just not in hot weather.

When we learned that vets were paid by the Kennel Club, we became more sceptic in regard to their effort to breed healthier dogs: in the end nothing more than a media hype ? And not an effort to get away from breeding by strictly adhering to the racial characteristics that had been set by the Club´s officials?  Like, e.g., stop breeding German Shepherds with sloping hips – which  still can be seen in the Crufts´s ring,  a caricature to itself.

After the broadcast of our two dog movies on the German TV channel WDR (and its affiliated studios) we received much praise and just as many people damned us. A brisk exchange of communication took place in Germany´s Public TV´s  guestbook – filling 56 pages (I will find you the top ten entries at the next opportunity;-)

So we were in the Bulldog breeders´bad books. We had shown an artificial insemination.

The male dog was supposed to be utilized for breeding. But due to his short legs he simply did not manage to jump on the female; this is why the vet had to give him,  well, a helping hand;-)

These dogs even need high-tech medicine for giving birth: more and more frequently, bulldog babies are born by cesarian section, because their heads are too big, due to breeding. The same happens to the German Great Dane – an awesome friendly dog which hardly reaches the age of five, six years. Because they were constantly bred bigger and bigger.

No, you can´t please everyone in the scene, especially not to the dog breeders and not to the VDH – the German Kennel Club. One thing though is right for sure: The VDH people do not necessarily have to be the worst. No. But those who  make their living out of dog shows – hundreds of thousands of Euros – have to set the standards accordingly. how does a Cavalier King Charles have to look like so that the Judge can more or less objectively select a winner? This is the mandatory basis for dog associations as the English or the American Kennel-Club – or the German VDH.

those who want to earn a living by attending dog shows … have to set the standards accordingly. how does e.g. a cavalier… have to look like…

And the Crux of the matter: For ages they had just and only been focussing on their looks!! At the King Charles Spaniel: round eyes, round head: the cuteness of the schema of the childlike characteristics. How to reach this? By looking for a male dog that corresponds most to the race standard and by crossing him with a female dog that corresponds most to the race standards as well. To give an example: grandfather with granddaughter. Because they are both still alive and present in the backyard. Yes, this is run short. But this might have been the pure convenience, matched with the urge to be able to serve the market for this race. And to make money out of it. And to get recognition at dog shows.

And the consequences? King Charles Spaniels suffer from syringomyelia, a constriction of the medulla cannel. There are studies claiming that more than 70% have this heredity inside; not all show symptoms, though. That look like this: The dog feels like there is a swarm of flies on the back of its head – no, rather inside its head! This is why it has to constantly scratch it, accompanied by a miserable caterwauling. This is just horrible, you can find Youtube videos which caused nightmares to me… (Even worse are videos with epileptic dogs. Epilepsy is rather common among Australian Sheppard for example. The only thing that helps are pills. Lifelong.Horrifying.)

The King Charles can be “healed“ too, by surgery, widening its skull. But this helps not for every single pet. And over all: Brain surgery? For a dog?

Oh yes, dog owners are crazy and they´ll spent almost every cent to help their  dog they love so much.

Next: How we met Pukka in Jackson Hole, Wyoming, USA. 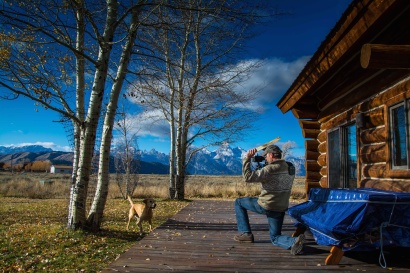